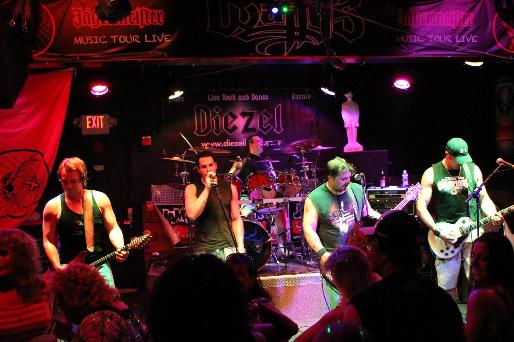 Diezel was formed in 2007 with Gary Massucco, John Mauriello, and Richie Laquidara from the band Busted Nutzz joining Rob Wesinger and Steve Lakos from the Maxwells. This line up remained until January 2010 when Rob had to leave and new singer Sergio Lepore joined the group. This five piece became a four piece in 2011 with the departure of Steve. Recently they are back to being a five piece with the addition of keyboard player Curtis Spargo!
Diezel is one of the hardest working bands in the area, covering a wide variety of songs from heavy to poppy, rock to rap, edgy to mellow.///the list goes on. Constantly adapting , Diezel gears out sets toward each individual club to blend with the atmosphere of each venue while having a good time with the crowd as well! The concept is easy, great song selection, professional attitude and have a great time doing it! This recipe is sure to please any crowd!
My Database

Add your Festival's Schedule or Artist Lineup to Your Website

Events will appear as images on calendar view

Is the background color dark, or light? (i.e. - Dark Theme has lighter text)

List view only - Users click the "+" symbol to expand an event and see description, or enable this option and all event descriptions are expanded by default

Only if you select calendar as default view, this option will force users on mobile devices to see the list by default instead

Copy/Paste this code into the html of your website's homepage or shows page.

Powered by the MusicIDB API™, our WordPress plugin is currently only available for Venues. The plugin will load faster than the embed code, and there will be no scrollbar on your list view of events. Artists and Companies update coming later in 2018.

Install MusicIDB Events Calendar Plugin from the "Add Plugins" screen of your WordPress back-end, or download and upload to your wp-content/plugins folder.

Email [email protected] or chat with us below if you have any trouble.